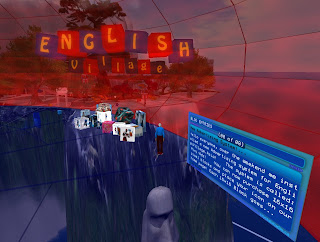 I remember writing myself a note to investigate the idea of 'locationalised' teaching. I thought that just as film makers go on location to make films, teachers could (many did) go outside the classroom to various places - the market, the railway station, the hospital (locations) and teach the learners the language required in, encountered in, required in specific locations. The thrust of my argument was always to get away from the idea that learning a language should be grammar- or lexical-led but a matter of learning how to mean what you want to mean and create the appropriate effect on the listener from the way you uttered it which involves pronunciation, intonation and appropriateness. It seemed to me that "locational" teaching, apart from getting the learners and teachers around in the fresh air, would throw up much of the language they needed socially - and this would actually be optimally contextualised, very important for helping with the conveying of meaning. 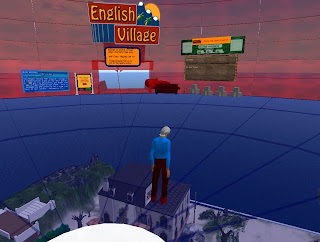 Looking down on the village

These reminiscences were prompted by a recent, unscheduled guided tour around Second Life's English Village by its creator 'Centaur' - an American working and living in South Korea.

The reception area of English Village appears to be made of glass, or some such transparent substance. Way below, you can see the village, which also contains a beach. To get down there you "sit" (actually hang) from a trapeze bar and slide at a steep angle but a reasonable speed to a point in the village below opposite the entrance to a villa. 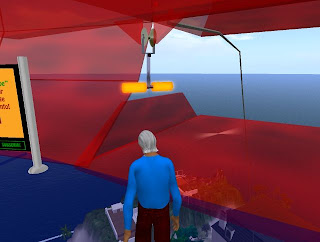 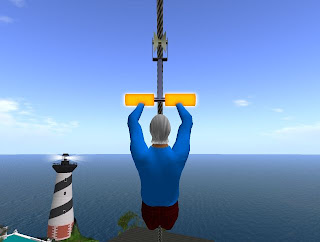 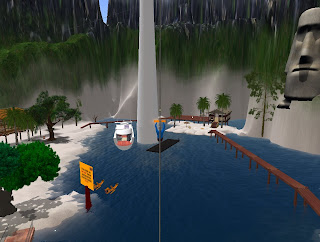 The villa is a well-equipped study centre. Near the main entrance is a sign asking you to listen to a recording. (This did not work for me, but that could be because I am not a signed-up student). Inside the villa are other electronic learning aids, including a large video screen. 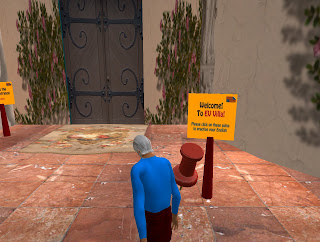 Entrance to the villa. 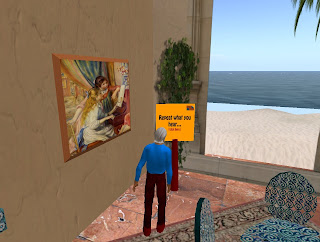 Practice your English
But it was when we went outside that Centaur reminded me of "locational" learning/teaching. He demonstrated the use of a holodeks(I realise other sites make use of these devices, but this was is the first time I'd had them demonstrated to me. Holodeks are like electronic stage scenery that can be changed at the typing in of a short keyword. You are in a New York apartment, not a very smart one, and - clickety-clack, you are in the reception area of a smartish hotel. Clickety-clack, and you are in a conventional classroom, clickety-clack and you are somewhere else. But Centaur's piece de resistance, using the gestures of an African rainmaker, was to summon up a typhoon. If I'd managed to get my HUD on quickly enough (heads up device) I could have experienced and described to you what it feels like to be sucked up by a (virtual) typhoon. Next time, perhaps. 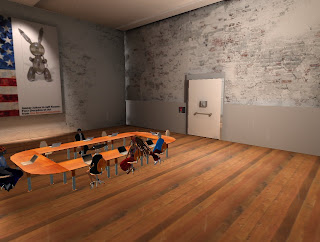 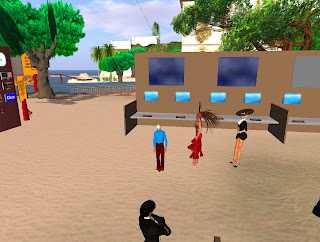 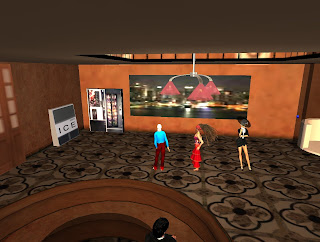 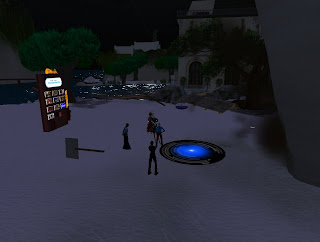 Here is a link to Melba's blog - recording what she does attending an intensive course at LanguageLab. 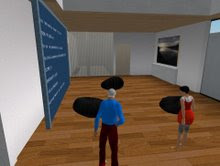